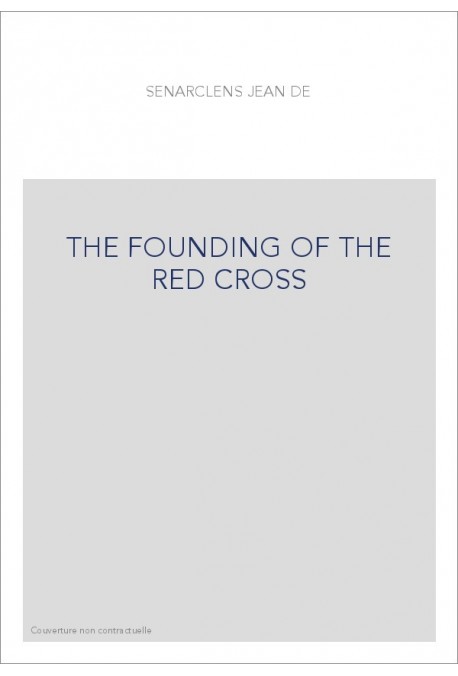 THE FOUNDING OF THE RED CROSS

The Red Cross was born of the lucky encounter of two men with similar aspirations who differed profoundly in character and temperament : Dunant the visionary backed by Moynier the man of action. Without in any way detracting from the merit of Henry Dunant, whose book Un souvenir de Solferino touched all hearts in Europe and created the necessary conditions for his ideas to be put into practice, by others, Jean de Senarclens draws on the documentary evidence to describe the different stages of the founding of the Red Cross, its organization and the measures adopted by governments to ensure that it functioned. He thus provides essential evidence for the history of the enterprise. This book is also an attempt to set the record straight : posterity has showered praises on Henry Dunant ; disregarding history, it has awarded him the title of founder of the Red Cross, while caricaturing Gustave Moynier or quite simply forgetting him. In the word of the author : "It was time to remedy the injustice. That is what we have tried to do." To that end, he has studied the life and character of Gustave Moynier and depicts him as a man entirely devoted to the cause of the Red Cross and of the humanitarian law that would govern its operation. Moynier became the first president of the ICRC in 1863, remaining in that post for over forty years, during which he set up the different bodies of the organization and defined their activities in peace time as in war. That truly colossal task he accomplished thanks to his courage and his stubbornness, giving of himself with total dedication when the interests of the enterprise were at stake and defending the Geneva Committee against all attacks. His life was a series of struggles against his own natural timidity, against sceptics and opponents of all kinds, and against the horror of war. From all, he emerged victorious.